Do BI vendors ignore competitors’ positions or follow the herd?

Why do so many Business Intelligence (BI) software companies use “insights” as their position? Of the 19 BI companies evaluated in this 4th annual assessment, more than half (11) position around the notion of “insights.”

There are two polar opposite explanations for what I call “me-too” positioning which means no differentiation. Either the BI companies are ignoring their competitors or they are copying them which a McKinsey analysis described as “a tendency to follow the herd rather than create strongly differentiated brand messages.”

This analysis includes two perceptual maps. The first one lumps together all companies claiming “insights.” A second one later in this blog shows you the 11 different ways BI companies are attempting to claim “insights.” Based on an analysis of websites, here is how the BI vendors are positioned in May 2018: 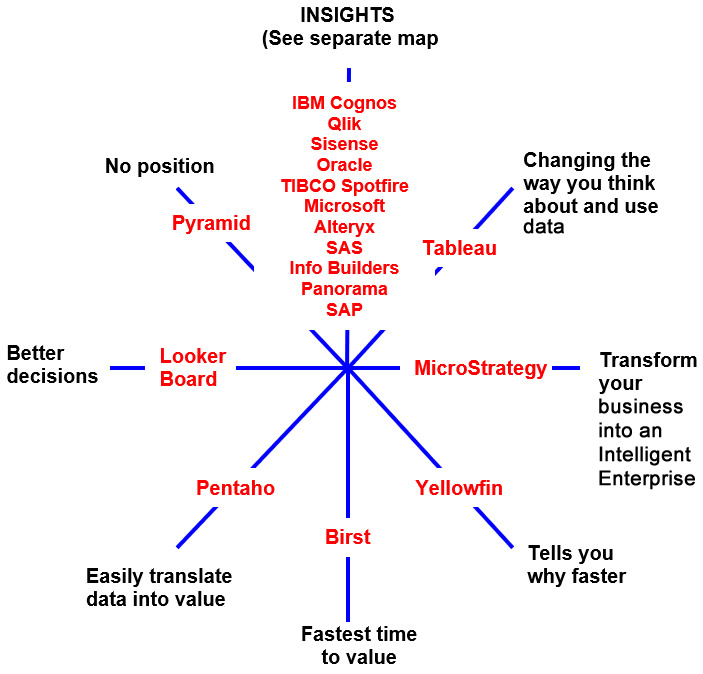 In last year’s assessment I explored the possibility that BI vendors are doing what Ries & Trout said is the reason for lack of differentiation in their book published in 2001 “Positioning: The Battle for Your Mind:”

The Ries & Trout explanation didn’t make sense to me so I began to ask B2B marketing and product management executives why so much “insight” in BI positioning and marketing?

Andy Kamlet debunks the Ries & Trout explanation. Andy was CMO at FRx Software, and has more than 20 years of experience doing marketing, product marketing and product management for several B2B software companies in the Denver area. He has seen the latest trend marketing throughout his career with analysts leading the way without the analysts knowing it.

“They are saying what the analysts are saying,” said Andy, now principal, J3K Strategies Group. Since most analyst reports are written for management and especially CIOs, I was surprised by Andy’s explanation. But the evidence suggests that Andy may be right.

Forrester analyst Brian Hopkins began talking about “systems of insight” in 2014 and first wrote about “insights-driven businesses” in 2015. That’s about the time BI vendors began to move away from “better decisions” as the popular position and embrace the “insight” position.

Since then, Hopkins and other Forrester analysts have written thought-leadership reports that explained how to become “insights driven,” and the benefits of “systems of insight” and “insight platforms.”

Is “Insights” a benefit or is what it delivers the benefit?

However, many concepts covered in the Forrester reports seem to have been ignored by the BI vendors claiming “insights.”

The Forrester report says successful companies use data and insight it collects to erect “unassailable competitive barriers.” They “win, serve, and retain customers better than their competitors.”

I summed it up as Forrester advising that “insights” help companies become customer focused to achieve growth and competitive advantage. The perceptual map below indicates that the BI vendors didn’t draw the same conclusion. They view “insights” as a benefit. Here’s how 11 BI vendors are attempting to claim “insights:” 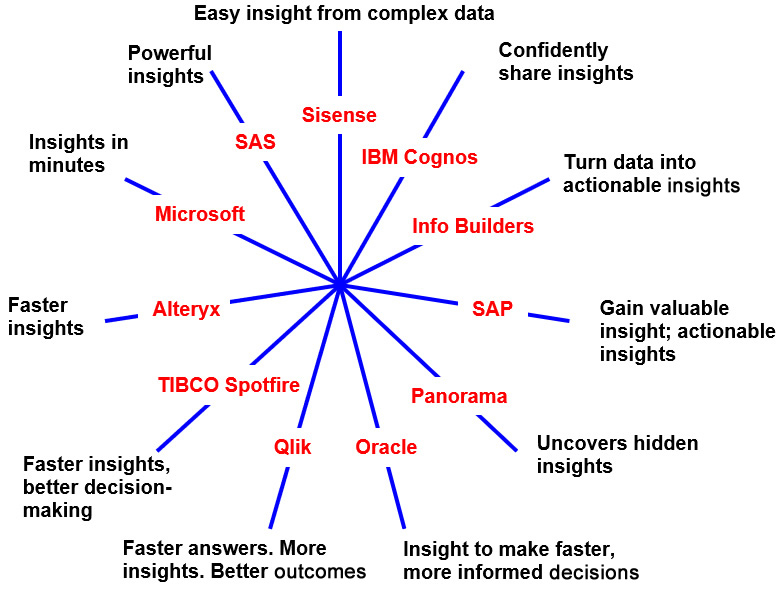 Given the popularity of “insights” as a position, can any of the 11 BI vendors claim it?

Unique claims highlight the difference, gap, or disruption the brain is seeking to justify a quick decision. To reach the decision-making portion of the brain even more effectively, Neuromarketing says you should turn your unique positioning statement into a contrasted statement (and be able to prove it) such as, “Only XYZ helps grow your revenue …” or “Messages that Matter is the only ….”

You’ll achieve that contrast the reptilian brain is looking for by making sure your positioning statement is unique. Perceptual mapping – used for this BI evaluation – makes it easy to see how you are positioned relative to the competition.

The reptilian brain is most sensitive to clear contrast, such as before/after, risky/safe, or fast/slow. Without clear-cut choice, the reptilian brain enters into a state of confusion leading to a delayed decision or no decision at all.

Lack of differentiation could be stalling some BI sales

I’ll bet that many BI sales opportunities drag on longer than they should, and some buyers probably just decide to stick with what they’ve got.

I was on the management team of TM1 Software (now owned by IBM) that positioned TM1 (an add-in to Excel) as delivering “instant meaning from large amounts of rapidly changing data.” Our tagline – which I liked – was “insight on demand.” Today, “insight/insights” is not just used in the BI market, but just about every vendor in every B2B software market is using one or the other or both.

“Insight” is an example of a good word gone bad due to overuse. While there are times when it is the right word, I try to avoid using it if at all possible. I’d never let my clients use “insight” or “insights” as their position.  They are way too “me-too” and fail to differentiate!