Why differentiate, and how to do it

If you need to be convinced that differentiation is critical to effective marketing, or you’re convinced but don’t know how to do it, read on.

Differentiation helps the brain make decisions faster
Unique claims highlight the difference, gap, or disruption the brain is seeking to justify a quick decision. To reach the decision-making portion of the brain even more effectively, Neuromarketing says you should turn your unique positioning statement into a contrasted statement (and be able to prove it) such as, “Only XYZ streamlines and accelerates …” or “Messages that Matter is the only ….”

Neuromarketing explains that the decision making portion of the brain “responds favorably to clear, solid contrast. It is hard wired to pay attention to contrast.  Sharp contrast helps your prospects’ reptilian brain make decisions more quickly and easily, and contrast is often needed to trigger the reptilian brain to make a decision.”

You’ll achieve that contrast the brain is looking for by making sure your positioning statement is unique during the positioning process described in this eBook. Testing for uniqueness is one of the steps in the process we teach online or on-site. Here’s how to do it.

Examine competitor marketing communications to determine their position
It’s fairly easy to scout your competition and learn how they are positioning themselves, because they do it in public. Start reading and analyzing e-mail advertising, banner ads, marketing collateral, and especially websites with an eye to deducing the position behind them.

A positioning statement frequently appears in the first or last paragraph (or both) of an advertisement, or in a prominent place on the home page of a website. A good one should contain a focused benefit idea or concept that addresses a real business challenge and, ideally, the target audience’s number one problem. For each competitor, analyze as much of their marketing communications as possible, including websites, direct and e-mail marketing pieces, brochures and press announcements.

Once you have determined the position for each competitor, organize the claims in a table. Some competitors are likely to have similar or even identical positions. Other competitors may publish many claims, making it more difficult to determine how they are positioned, if at all. It is a common mistake for companies to make two or more benefit claims of equal importance, so check for those, too. Here is a real-world example of how the following mid-market and enterprise Business Intelligence (BI) software companies are positioned:

OK, you’ve analyzed your competitors and created an informative table. Now what? The table isn’t the easiest way to see the competitive landscape. You need Messages that Matters’ perceptual mapping tool that makes it easy to see how your competitors are positioned. Here’s what a real-world perceptual map looks like; it shows you how Business Intelligence vendors were positioned in early 2017: 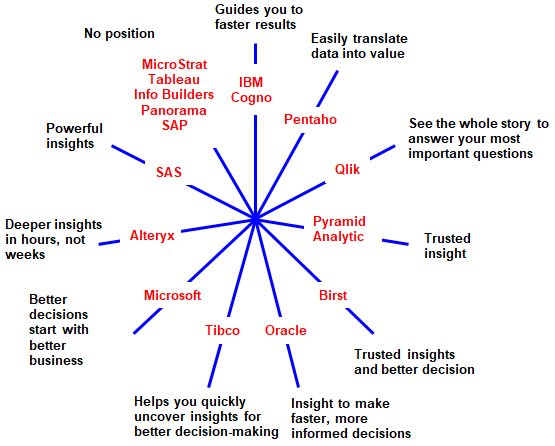 Differentiation cuts long sales cycle down to size
Differentiation is what B2B software technology companies should covet the most. Yet few companies successfully achieve this, generally because they either don’t know how to evaluate and determine competitors’ positions or simply don’t consider it sufficiently important.

Need proof that many B2B software companies fail to differentiate? Just take another look at the perceptual map above, and read this blog that highlights a classic example of vendors talking like their competitors almost as if they have copied them word-for-word. If only they realized what a mistake it is to make the same claims as their competitors.

Failure to differentiate creates market confusion, which inevitably leads to longer sales cycles, a familiar problem for many B2B software and technology companies. You probably know the symptoms, and now you know why differentiation is essential and how to do it.