Not much differentiation in the BI market

Many Business Intelligence (BI) software marketers would be well served to read “Positioning: The Battle for Your Mind.” Most are doing exactly what Ries and Trout identified as a problem way back in 1981 when the book was first published:

This lack of differentiation has been a significant problem since I started my annual BI evaluation three years ago. In 2014, seven vendors claimed “better decisions” as their position; in 2015 six claimed “insights” as their position.  This past year’s assessment is another woeful example of positioning in a vacuum:

Obviously, these vendors are not paying attention to how their competitors are attempting to position themselves, and according to Geoffrey Moore in “Crossing the Chasm,” positioning is the single largest influence on the buying decision.

I define positioning as the mental space in your target audience’s mind that you can own with an idea that has compelling meaning to the recipient. It’s in this mental space where your solution to the target audience’s most pressing problem is addressed and a meaningful relationship is formed. Keep in mind that a good position is useless if it is not repeated over and over for an extended period of time–in ALL your marketing communications.

“Neuromarketing” explains why you make your claims more memorable by repeating them: “Even repetition of a few simple words sends a strong signal to the reptilian brain (which makes decisions), prompting it to note, ‘I should remember that.’

“Repeat your claims so that the reptilian brain will bookmark them as important.”

We all filter unimportant marketing messages, and the way to get through the filters is to build trust with your target audience that you understand their problems. According to “Neuromarketing,” you’ll get an even more favorable response to your marketing when you continually claim a unique position in your market.

“Neuromarketing” further explains that the decision-making portion of the brain “responds favorably to clear, solid contrast. Powerful, unique claims attract prospects because they highlight the difference, gap, or disruption the reptilian brain is proactively looking for to justify a quick decision.”

I know most B2B software sales professionals would turn cartwheels to get a quick decision. But instead they continually complain about seemingly interminable sales cycles. I rarely hear them complain about their company’s inability to differentiate from the competition.

I assert that it is this lack of differentiation that is the cause for long sales cycles. The good news is that it isn’t that hard to differentiate and find a unique, memorable position in your marketplace. Take the first step by reading my blog about how to differentiate.

The graphic below was created with a “perceptual mapping tool” developed in Excel. Perceptual mapping – covered in the blog mentioned above – makes it easier to understand how companies are positioned relative to each other. Here’s what the BI positioning landscape looks like in early 2017 based on website evaluations: 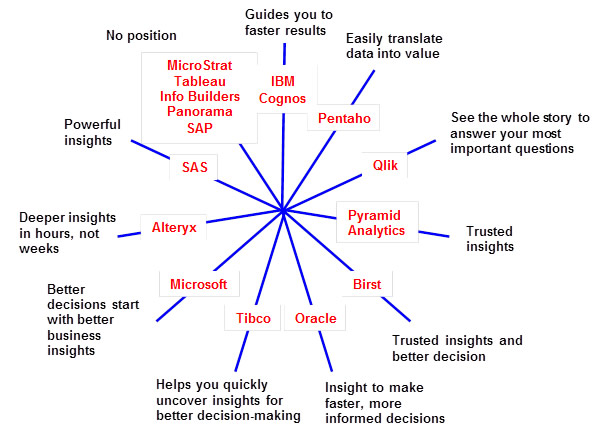 As you can see, only IBM Cognos, Pentaho and Qlik are making unique claims. You can also see that every vendor claiming “insights” or “better decisions” has a little different take on those two claims, but that doesn’t make them unique. Here are some other findings from my on-going evaluation of the BI market:

Tableau is an example of inconsistent messaging on its website and is worthy further scrutiny. For the last three years, Tableau has done an excellent job of positioning. “See and understand your data” was unique, but more importantly, it was simple. (Simple language is the most effective way to communicate because the decision-making portion of the brain does not understand complex concepts.)  Tableau also did a very good job of permeating its website with “see and understand your data.”

Now Tableau has adopted an inconsistent, shotgun approach to positioning. Instead of using the position it claims on its home page – “make your data make an impact” – as the central theme throughout, it jumps from one position to another and makes extensive use of “insight.” Here’s a table with links that shows you the main theme on six high-visibility Tableau web pages:

What’s wrong with hedging your bets and throwing out several different messages? Multiple claims compete for the brain’s limited attention, and they don’t trigger the brain to remember any of them. Almost certainly none of the claims will find the home Tableau covets in the minds of its target audience. Tableau is not alone. Eleven other BI vendors are failing to claim a position they can own.